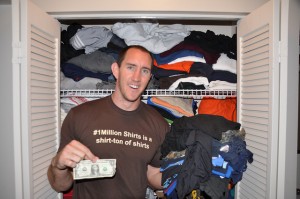 I had a very constructive conversation with the 1 million shirts founder, Jason Sadler, and the international development guys on Twitter last week. Jason told us that he had simply wanted to use his involvement in clothes retailing and his marketing savvy to do good in Africa, using social media platforms as the springboard for his project.

My assessment after the call is this: Jason is a guy whose initial intentions were good but who was badly advised, so the basic idea was misguided, to say the least. Africa is an emerging market with amazing opportunities, but 1 million t-shirts – apart from being hopelessly inefficient – started from the assumption that Africa is full of helpless poverty-stricken victims waiting for handouts. So-called aid based on this attitude has to stop.

After the call, we had lots of reactions on Twitter and from the African Diaspora. The debate is still raging and interest in the project is now high. I think it’s fair to say that the follow-up call with Jason was very positive. We will all learn from it. And I think Jason has begun to learn about Africa!

Teddy Ruge – Founder of Project Diaspora – and myself will offer our support to Jason, and help him put a strategy together. We will keep the community up to date on our progress in the weeks to come.

G. Kofi Annan is compelling all the reactions in an ebook format. If you want to add your ideas, please contact him via twitter @gkofiannan