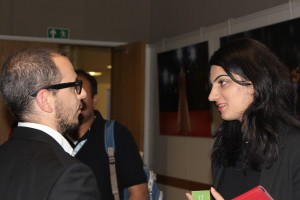 The Tuttle Club attendees really do have fun; I was one of them this morning and I did enjoy it. The Breakfast extended to lunch and took place at the InnPark- St James Park, I met really nice people with plenty of ideas. The ideas that can change our world; The Tuttle club was founded by Lloyd Davis who is a popular figure on the London Social Media Scene. Lloyd created the Tuttle club couples of years ago so people can get together, randomly, almost spontaneously, meet, discuss and share ideas. The meeting is very informal and its over a coffee or muffin, ideas flow literally instantaneously. People are relaxed, cool and friendly. Techno Bloggers, Journalist, techies, investors, PR experts, entrepreneurs and creator are amongst the attendees. Lloyds has created a new way of networking and clearly giving power to the people, the events is run by itself, “people get together and run it themselves literally” said Lloyd. They make their owns plans and choose a emplacement in London for meetings.

The Tuttle club is the modern networking, with thousand of networks out there; it has differentiated itself from the normal networking we are all use to.

The TedxTutle https://twitter.com/TEDxTuttle will take a place on the 17th of September 2009 and more events are planned in Europe. The First Tuttle club Africa will be announced very soon and will have its first event in Senegal.

Lloyd Davis is a popular figure on the London Social Media Scene. Lloyd has been blogging and podcasting since 2004 and with a diverse background that includes theatre, information management and public service he has acquired a unique, in-depth and practical understanding of how to use media and social networks on the web to build and sustain rich relationships online and off-.
In the last year, Lloyd has written and produced blog content for clients as diverse as BP, the World Health Care Congress and Surrey Primary Care Trust and worked regularly with Policy Unplugged as a Social Reporter at corporate and public un-conferences. Lloyd also has a talent for facilitating Open Space events holding workshops for ORG, Online Information and VNU’s Blogs and Social Media Forum.
Lloyd runs the London chapter of Social Media Club. He has recently spoken at Web2Open in Berlin, the 3rd London BarCamp and BarCampUKGovWeb. Lloyd is the also founder of the Tuttle Club, a community-based effort to create a physical space for people in Social Media to come together for social, learning and work activities.